Education for Everyone. Worldwide. Lifelong. / Our work / News /
July 2021

The programme for further training as peace educators began in December 2020. Fifty-eight interested people were selected from over 200 applications. Das Programm wurde größtenteils online durchgeführt, fand aber einen Abschluss in Präsenz. The programme was conducted online but concluded in a face-to-face working camp. 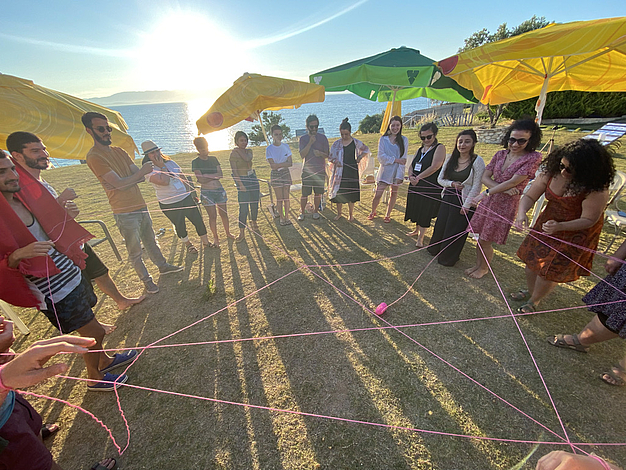 “I always thought I was for peace. I realised here that I had never really dealt with what peace actually means, what my stance is towards peace and what peace has to do with me personally.”

This statement by a teacher who took part in the peace education programme of the Hatırla! / Remember! project funded by the German Foreign Office and run by the beraberce Association (beraberce = together) and the Institute for International Cooperation of the German Adult Education Association (DVV International) illustrates the impact of the programme on the participants.

The programme for further training as peace educators began in December 2020. Fifty-eight interested people were selected from over 200 applications. The participants came from all over Turkey – from Çanakkale in the west and Mardin in the southeast, from Bartın on the Black Sea and Antalya on the Mediterranean. There were many teachers and lecturers from popular education centres (similar to the Volkshochschulen in Germany), master’s and doctoral students as well as employees of local administrations and civil society organisations.

The programme was conducted online; on the one hand because of the pandemic, on the other hand to enable interested people from all parts of the country to participate. Two groups were formed, which were trained in peace topics (peace culture, peace theories, non-violent communication, dialogue and reconciliation) as well as in the fundamentals of transformative adult education, both theoretically and application-oriented. But almost more important than the topics was the method of delivery: a safe space was created in which everyone could freely express their opinions. The adult educators of the beraberce Association acted as facilitators. They used various methods to stimulate self-learning processes and an examination of oneself and of opinions that had hardly been questioned before, and trained the participants in critical thinking. One participant, an active human rights activist who has been working for years as an adult educator in various civil society organisations, emphasised in the final evaluation that she had never experienced such a democratic learning environment and that from now on she would certainly plan and deliver her programmes in a completely different way.

Although the dropout rate in online programmes is usually very high, participation was consistently high. The programme was crowned by an intensive outdoor working camp in June 2021 with both groups present (with the necessary distance between people). The support of the Izmir Metropolitan Government enabled 42 participants and 5 beraberce representatives to meet in the seaside resort of Çeşme, where they worked together on new peace education learning modules, exchanged ideas, planned further offerings, evaluated the programme, criticised, discussed, learned –  and swam, played and celebrated together.

The practical test after the training

From July, the new phase of peacebuilding begins: The peacebuilders who have now been trained will carry out their own peacebuilding activities in their respective contexts – one participant wants to conduct a training course for social workers in refugee work in the conservative city of Urfa, and a school headmaster wants to train his staff. Two teachers are revising children’s books and a lecturer in popular education is conducting a peace workshop on storytelling, a university lecturer wants to incorporate content of the training into her seminars and a youth social worker wants to conduct roleplay for young people.

A PhD student from Diyarbakır, Kurdistan, who has had numerous experiences with violence and counter-violence, state abuse and human rights violations, said in her closing statement that she previously perceived peace education as a format in which mostly older, male authorities spoke and she took notes. Now she had experienced what democracy and peace could be and what she could do for it.