DVV International has always been deeply involved in intercultural issues alone through its orientation of learning in partnership on an international scale. Through additional financing by the European Commissions SOCRATES and Lifelong Learning Programmes the institute has been involved more deeply in the issue by coordinating different projects under GRUNDTVIG since 2002, namely “Tolerance and Understanding Our Muslim Neighbours” (TUM 2002 – 2005), the “Network Intercultural Learning in Adult Education” (NILE 2002 – 2008), INTERtool (2005 – 2009) and as a partner in the project “Religious Diversity and Anti-Discrimination“ (2005 – 2008), in which training materials on the issue are being developed. In the framework of these projects the issue of intercultural learning and diversity man agement have been the focus of intensive discussion amongst different European organisations working in the field of adult education and many of the products and outcomes can be seen to have a sustainable value to be used in non formal settings and also to be transferred to other than European contexts.

With the following we would like to share some of the most interesting results generated from the NILE project with the readers. The work of NILE is continued in form of a virtual working group under the roof of the European Adult Education Association, EAEA.

NILE’s focus and objectives was to find good practice approaches to intercultural learning delivered in the different countries of the European Union, in which migra tion has brought real challenges not only to schools but also to the field of adult edu cation. All of them have practically become multiethnic in the last 10-15 years.

To cater to the diversity of education needs in multiethnic societies a paradigm shift is needed to value ethnic minorities and migrants in their role as change agents with a right to occupy public space and to influence the future shape of Europe’s member states. Minorities and migrants themselves should participate in the re quired process, in which the principle of equality is reconciled with the recognition of difference, while safeguarding ethnic minority traditions, and including diversity in the national public sphere.

Results of the NILE Project

The state-of-the-art on intercultural learning in the partner countries was established on the basis of key questions about politics and society, agencies involved, set tings, target groups, training approaches and participation by ethnic minorities. The approaches, definitions and political objectives of the different countries ap peared diverse.

Factors in the success of different approaches to intercultural learning were identi fied through examining case studies. The compiled case studies give a picture of the diverse forms in which intercultural learning can take place. Experiences were broken down into categories according to their specific focus, covering dialogical concepts, empowerment, capacity building and other examples. Some case stud ies offered the opportunity to identify “Guiding Principles of Intercultural Learning“ and demonstrate how they have been applied for example in Austria, Finland and Germany.

“Empowerment and capacity building” was by some case studies established as a crucial first step towards intercultural learning. Examples from Belgium, Latvia, the Netherlands and the UK illustrate success stories.

Four basic conclusions can be drawn from a general analysis of the country outlines in NILE.

1. At a general level, intercultural learning is linked to the wider field of human rights, rights of minorities and migrants and the Geneva Convention on Asy lum, and to the fight against discrimination, racism and xenophobia in the context of internationally recognized principles.

In all European countries national constitutions and laws guarantee some kind of freedom from discrimination (mostly linked to the labour market), and where this is not already the case, the EU anti-discrimination directive is pushing for greater enforcement in national law. Some countries have set up public monitoring bodies, some have launched campaigns, and most countries have at least an ombudsperson responsible for either minority or migration matters. Some of these ombudspersons have the right to investigate all proceedings or measures that may infringe rights, and to submit proposals for legal remedy. Also, all EU member states have ratified most of the important international Conventions, such as the “Convention on the Protection of Minorities 28 (IIII)” (Council of Europe), which aims at securing the immigrants’ human rights.

2. Only few countries have until now embraced the concept of cultural diversity as enshrined in Article 2 of the UNESCO Universal Declaration on Cultural Diversity. 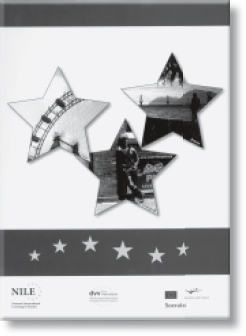 Belgium demonstrates in a positive way for governments to be explicit about the reality of cultural diversity and its implications, shown by the following quote: We want to bring into our Flemish cultural policy that kind of diversity that characterizes our society not as a problem, but as a desired reality. Therefore we introduce the design of interculturality into the cultural policy as an explicit goal. To invest in the education of the community and in the (inter)cultural activation is an important start for a real and a positive intercultural society, where every person stands central. (Policy documents 2004 –2009 of the Ministry of Culture of the Flem ish Community). All other countries are somewhere in between, ranging from a gen eral lack of awareness of inter cultural learning needs, as seems the case in Cyprus, to early stages of an awareness-raising process, as this quotation from Bulgaria shows:

The practical provision of adult education seeks to ensure that active citizenship, personal fulfilment and social inclusion are implemented in the struggle to survive in a market economy. This is a long and difficult process, especially for adults who are excluded from formal education or the labour market. And we must not forget that in the midst of Europe there are still states that deny democracy and participation to their citizens.

The NILE partners are convinced that if intercultural learning does not become a principle of adult education embedded in policy, programmes, structures and concepts and based on the principle of dialogue between the diverse actors in society, it will not gain ground in the process of building the knowledge society.

To achieve this, there is consensus in the network that intercultural learning has to be:

It is important to note that migration and immigration policies have a fundamental influence on the overall climate in which intercultural learning takes place. There fore integration policies on a European, national and local level must be further developed to reach a holistic understanding a two-way process. “Social” and “Economic” integration need to go together. In some countries the existing legislation needs to be adapted to make clear that diversity is appreciated. 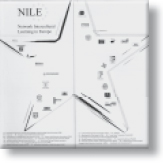 Integration does not only mean financing language courses for migrants, refugees and asylum seekers. It means among others ensuring access to fundamental rights including civil, political, social, economic and cultural rights, strong antidiscrimination policies, social inclusion policies in housing and health, positive family reunification policies, and individual rights and an independent legal status to women accompanying their partners and husbands.

With its Green Paper on managing economic migration of January 2004 the European Commission has re-launched a debate on labour migration, which is significant for the field of adult education. 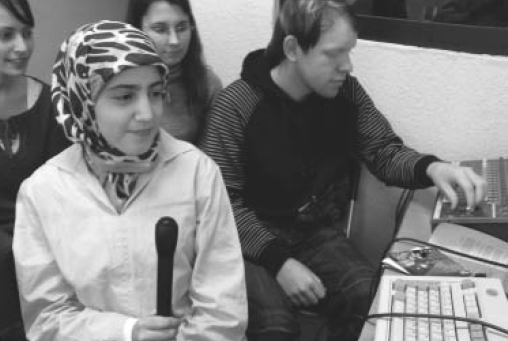 In the years of working and discussing together in the NILE partnership, we have come to the conclusion that there is no one strategy that can be applied everywhere. But there is a consensus that intercultural competence is one of the most important basic skills needed to achieve a successful mainstreaming process. It can also be concluded that intercultural competence is needed on all levels: individual, institutional, societal, and political.

The closing conference in September 2008 of the 6 year long networking gener ated some very pragmatic ideas from participants, which show some of the steps taken and still needed. Guided by the question: “Intercultural Learning – the key to successful integration under which conditions?”, some assumptions were first clarified:

Participants appreciated the opportunity to exchange perspectives and ideas on the issues confronting educators for the integration of minorities, intercultural learn ing and intercultural dialogue. Several ideas and some key recommendations to the European Commission were made as a conclusion to a rotating brainstorming exercise:

1. What can majorities do to facilitate successful inclusion of minorities?

2. What can minorities themselves do to promote a positive image of their contributions?

3. What are the biggest challenges of a diverse inclusive society?

4. What are success factors for intercultural dialogues?

5. What are potential pre-conditions needed to support minorities inclusion?

6. From your practical experience what has worked well to kick off good
intercultural dialogue?

Recommendations to the European Commission:

1. Bring about the establishment of a working group on intercultural dialogue under the open method of coordination in the EU council of Ministers.

2. Legally – diversity on all levels:

6. European Union should have a leading role 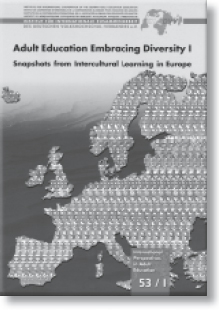 They are available in English fromDVV International or as pdf download from the websites: www.dvv-international. de and www.intercultural-learning.net