Xie Guodong, Secretary General of the Chinese Adult Education Association
(CAEA), provides a comprehensive overview of the situation
of adult education in China, of its aims, role and achievements not
only in the fields of literacy and rural development, but also in higher
education.

I. Adult Education is an Important Part of the Educational
Cause in China

1. Adult education has been enjoying the government’s due
emphasis in China

Since the eighties of the 20th century, China has been implementing two important strategies of “opening up to the outside world” and “focusing on economic construction”. To satisfy the modernization drive’s demand for competent laborers and specialized talents in various fields, the Chinese government has been attaching high importance to the development of adult education and making a series of important policies to promote the development of China’s adult education.

Furthermore, the Chinese government has also adopted a series of other important documents such as “Action Program for Vitalizing Education for the 21st Century” and “Decision on Deepening Educational Reform and Promoting Competence Education”, emphasizing the “fundamental establishment” and “gradual improvement” of a lifelong education system and a lifelong learning system. Obviously, this shows that the Chinese government has deepened the understanding of adult education in view of the strategy of national development in the new century.

At the 16th National Congress of the Chinese Communist Party held in November 2001, the “development of a lifelong-learning-based society and promotion of citizens’ all-round development” was made one of the objectives of the nation’s “overall construction of a well-off society”. As an important part of the lifelong learning system and a key means for realizing a learning-based society, adult education is believed to enjoy faster development.

2. Aim and tasks of adult education

It is acknowledged that adult education should be viewed in a new perspective and from a strategic angle.

The fundamental aim of adult education is to enable all citizens with the ability to live, work and labor to realize all-round development through developing their personal resources, improving their knowledge and skills and optimizing their personality in accordance with different needs in life, work and learning.

Adult education targets all citizens (or all learners). The society, the state and governments at all levels should advocate and publicize the idea of lifelong learning and provide educational facilities to meet the needs of adult learners, help them utilize various learning resources and create an ideal social environment for lifelong learning.

Specifically, adult education should fulfill the following tasks:
(1) To provide remedial basic education to those citizens who have failed to complete basic education and secondary education;
(2) To offer pre-employment training according to employment needs to help those looking for jobs to meet standards of ideological development, moral cultivation, cultural knowledge, vocational skills and practical ability;
(3) To offer continuous education to specialist professional personnel to help them adapt themselves to rapid social progress and technological development;
(4) To provide varieties of socio-cultural and life education to all citizens to satisfy their increasing spiritual demands; and
(5) To satisfy individuals’ needs for personal development and assist individuals and social groups to seize personal and social opportunities for overcoming future challenges.

To view adult education as a whole, it will play an important role in the establishment of the lifelong education system and the formation of a learning-based society in China.

3. Statistics of adult schools at various levels throughout the country in 2001

Due to the leadership of the Chinese government and the joint efforts of the Chinese people, adult education in China has obtained remarkable achievements in the past 20 years.

1. Illiteracy has been eliminated from the young and middleaged population

In February 1988, the Chinese government promulgated the Regulations on Literacy Education. It is provided: “All the illiterate and semiliterate citizens at the ages from 15 to 40, except those without the ability to receive literacy education, shall enjoy the right and obligation to receive literacy education, regardless of sex, nationality or race”. As a result of decades of unremitting efforts, China had basically eliminated illiteracy from the young and middle-aged population by the end of 2000. On March 28, 2001, the National Statistics Bureau published the main data of the 5th National Census in 2000, revealing that the illiteracy rate among the people in the age group 15–50 had decreased to below 5% of the total population.

Table 2: Changes of the Total Number of Illiterate People since 1949 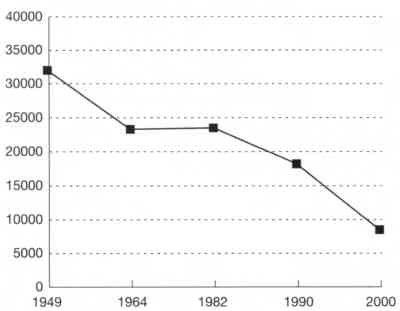 Source: Published statistics of the 5th National Census in 2000.

It should be specially pointed out that great achievements have been obtained in literacy education for women. Accordingly, the illiteracy rate of women has decreased by a large margin and the cultural competence of women greatly improved, thus playing an important role in heightening women’s social position and emancipating their ideas.

Table 3: Changes of the Number of Illiterate Women since 1982 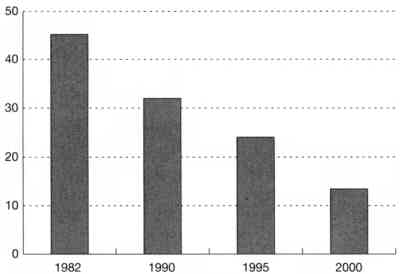 Source: Published statistics of the 5th National Census in 2000.

2. A rural adult Education network at county, township and village levels has been basically established

During the period 1986–2000, altogether 867,434,800 farmers received adult education. In the fifth Five-Year Plan (1996–2000), 456,000,000 person/time farmers were trained. So far, the rural technical training schools have covered 93% of counties, 94% of townships and 64.4% of villages, and other learning institutions such as specialized secondary schools for farmers, secondary schools for farmers and primary schools for farmers have also been set up in rural areas throughout the country, forming a rural adult education network covering the counties, townships and villages of the country. At the same time, the steady improvement in the training quality and level has resulted in huge economic and social benefits.

3. On-the-job training and continuous education have effectively improved the skills of workers

According to relevant statistics, an average of more than 30 million workers receive various forms of on-the-job training each year; several million specialist technical personnel receive continuous education each year; and several million serving officials are trained each year. By offering effective training activities, adult education has remarkably improved the overall skills of those in work and has played an important role in the socialist modernization drive.

Adult higher education has emerged to satisfy the practical needs of the development of the socialist economy, science and technology and the modernization drive. With those in work as the target, adult higher education is aimed at training qualified talent for the front line of production and management. As indicated above, there were 686 tertiary education institutions for adults in China in 2001, including 45 broadcast and television universities, 409 tertiary institutions for workers, 3 tertiary institutions for farmers, 104 colleges of managerial officials, 122 teacher colleges and 3 independent correspondence colleges. In addition, there were also other evening universities and correspondence colleges sponsored by regular institutions of higher learning.

Adult colleges and universities have not only offered opportunities for all citizens to receive higher education, but also satisfied the learning needs of those in work. At the same time, a large number of specialist personnel in short supply have been produced. So far, adult education has become an important means for the development and popularization of higher education in China.

Table 5: Numbers of Candidates and Graduates of Self- Learningbased Higher Education in China during 1997–2001 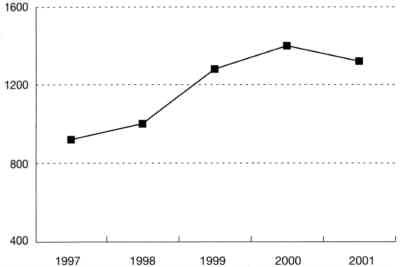 5. Preliminary achievements have been made in the experiment of constructing a lifelong education system and building a learning-based society

6. The age limit has been broken for the development of senior citizen education

As a developing country with the largest population in the world, China is confronted with the very serious problem of an aging population. According to relevant census statistics, by the end of 2000, there were 132 million people aged above 60, accounting for 10.32% of China’s total population and a fifth of the world’s aged people. Moreover, the trend towards an aging population in China is becoming more and more serious. It was in September 1983 that China’s first university for senior citizens was created in Shandong Province and enjoyed the Chinese government’s encouragement and support. Now, there are in the country more than 5,000 universities for senior citizens with a total enrollment of nearly a million senior citizens. In some regions, multi-channeled and multi-formed networks of education for senior education have been preliminarily set up. All these networks of sen ior citizen education have provided learning opportunities for aged people and enriched their life with various learning activities.

We have obtained inspiring achievements in the development of adult education, and the challenges are also opportunities. Therefore, we must make bolder efforts to realize the important role of adult education in the establishment of the lifelong education system and a learning-based society and in the promotion of citizens’ all-round development.