Education for Everyone. Worldwide. Lifelong. / Adult Education and Development / Editions / AED 79/2012 / NETWORKING / The Work of Networking: Intertwining Collaboration and Strengths

A dynamic socio-political context, social commitment free of personal interests, and willingness to learn together with others and to act free from bureaucratic regulations were the conditions for the birth of a regional Central American network of popular education which gave itself the name “Alforja”. One of its founders, Oscar Jara Holliday, describes its creation and development. Oscar Jara has been one of the prominent personalities and actors of the Latin American Association for Adult Education (CEAAL).

The Work of Networking: Intertwining Collaboration and Strengths

I write this reflective essay as a result of what I was taught through my own experience in the networks in which I participated in the last thirty years; most particularly from my experience with the ALForJA (Mesoamerican network of Popular education), created in 1981, of which I was coordinator until 1998.1

Our network was born from four fundamental points of confluence: a dynamic and convocational socio-political context (the Sandinista revolution and Central-American processes of the eighties); a practice and attitude of selfless commitment; a readiness for shared learning and an operational non-bureaucratic mode of action which enabled the teams of people of our institutions to begin to live intensely the experience of sharing the challenge of contributing to unprecedented development, through to the understanding and realisation of our practices and thoughts (I emphasise the idea of sharing a common challenge and generating a dynamic of mutual learning).

We had to be able to express ourselves in order to respond to the challenge which was overwhelming us each individually. And we did it with intensity, but slowly and conventionally, without hurrying organisational structures, generously sharing everything that each one of us had in his saddlebags, assuming enormous tasks and responsibilities with the conviction that together we could face them bravely. we created education and training programs, toured the rural and urban areas, did research, historical recovery, produced educational materials, workshops, seminars, meetings... we were intertwining collaboration and tying knots with our strengths, to the point that, without realising it or saying it, almost without intention, we wove together the Alforja (Saddlebag) Network as a space to meet in, work jointly and strategically project, until on a formal May 28, 1981, we gave it a name – through to this day, a story too long to be included in this writing...2

Since its founding, and with reference to other spaces in which I participated, I offer the following proposals to, hopefully, encourage critical and participatory group discussion on this topic: 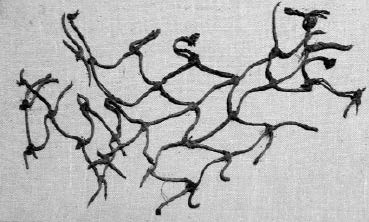 The challenges of this era are immense and go far beyond the traditional struggle for justice, equity, peace and human rights. In this 21st century, marked by contradictions and planetary dynamics characterised by the dominance of an economic, social, political and cultural model which cannot be universal and is not sustainable, with a major crisis each day, there is a need for us to believe that another world is possible, that we also work toward a different political culture and build different power relationships everywhere we meet. the Indignants3 movements that have broken out across the planet are a clear expression of this.4

With a different ethic, with its centre in human and planetary consciousness, networking can become an effective and efficient option for making changes locally and globally. From community work, sectoral organisation, the establishment of worldwide electronic communications, the formation of organisations, institutions and social movements, networking (person to person or connected in cyberspace), is given to us as a significant possibility to address social exclusion in every corner of our planet.

1 ALFORJA is not an acronym. It is what they call those double bags (leather, straw or fabric) that the peasants of many countries carry on their shoulders or on horses, mules or donkeys, carrying their supplies, tools, seeds, books... meaning an instrument for going from one place to another which inspired us to name our network after it.
2 Currently the network consists of CEASPA (center for Studies and Social Action in Panama) which is the regional headquarters; CEP (centre for Studies and Publications Alforja of costa rica); CANTERA (center for Popular education and communication of nicaragua); CENCOPH (centre for Popular communication of Honduras); FunProcooP (Foundation for the Promotion of cooperatives of el Salvador); SERJUS (Legal and Social Services of guatemala); IMDEC (Mexican Institute for community development of guadalajara). View: www.redalforja.net
3 http://en.wikipedia.org/wiki/2011%e2%80%932012_Spanish_protests
4 e.g. www.tomalaplaza.net