Education for Everyone. Worldwide. Lifelong. / Adult Education and Development / Editions / AED 81/2014: Communities / ARTICLES / How growing beans made all the difference for the people of Mfou in Cameroon

Abstract – Looking at rural development efforts, it is clear that in most regions in Cameroon, especially those of the Central Region, living conditions are not improving. For many years development focused on income-generating products for export, neglecting other agricultural products that could substantially improve local living conditions. Inspired by the practices of bean cultivation in the western part of Cameroon, and due to considerable revenue which the farmers brought in, the Non-Governmental Organisation (NGO) CHASSAD-M wanted to introduce this type of cultivation into the agricultural methods of the people of the Central Region, notably in the Mefou-Afamba subdivision in Mfou.

In the world today, poverty is more prevalent in rural than in urban areas. Two-thirds of the people in the world who suffer from malnutrition are farmers. Three quarters of the people who must sur vive on less than a dollar a day are in rural areas.

In rural areas there are needs in health, education, communication and environment. Education is a key factor in reducing poverty and inequality and fostering citizenship and good governance. The social environment also poses threats such as the abuse of alcohol, and the lack of access to drinking water. These are some of the problems that confront the rural population every day. Mfou, a part of this rural environment, is no different.

When the NGOs came to town

The political transformations introduced in Cameroon in the early 1990s encouraged an explosion of NGOs. From 10 in  1990, their number is estimated at 600 today. A list of NGOs  identifies some areas of intervention: the advancement of women, community development, popularisation of techniques for the protection of the environment, the structuring  of the rural world – to name just a few. Three factors allowed for the proliferation of these NGOs: the liberalisation of the  political landscape which introduced the freedom of association, the willingness of donors to directly reach the grass-roots and, finally, the reduction of poverty.

To explain the emergence of NGOs in rural areas we must look at it in the context of the rapport between the State and the People as regards development. In the recent past there was talk of the Welfare State, where development was conceived of as being the sole responsibility of the State. This development was not sustainable because it was desired and delivered by actors who did not totally comprehend the needs of the people. It did for example not necessarily make the people participate in their own development.

In addition, donors wanted to create other ways to deliver assistance to rural populations, since up to then aid was funnelled through state channels. The results of the state method were not convincing; a great par t of the aid was diverted or used without any attention being paid to the results. Because of their specialisation, NGOs appeared  to be an efficient link to help people.

Despite a few bad apples (non-completion of projects, disputes arising from the provision of funding, fictional structures), there are those NGOs who remained faithful to the mission of promoting development alongside the State. Many of these have focused on agriculture in the rural areas, with the aim to strengthen the livelihood oppor tunities of rural communities.

Taking stock of the challenges

On August 31, 1991 a seminar was organised in Mfou in order to identify the socio-cultural and economic barriers hindering the development of this rural area. The massive participation of farmers was a clear sign of the people’s willingness to take charge of their own destiny. The seminar was an initiative of Madame Elisabeth Atangana, founder of the Union of Community Groups of Esse (UGCE).

Following this meeting, the following problems were identified:

Faced with these difficulties, a temporary solution was adopted: the establishment of a platform for reflection. After 12 months of deliberation, a structure was created proportional to the problems which had been identified. It was named Chaine de Solidarité et d’Appui aux Actions de Développement Durable de la Mefou (CHASAADD-M) [Chain of Solidarity and Support for Actions of Sustainable Development of Mefou].

After a first unsuccessful experiment conducted in Mbalmayo on the possibility of cultivating beans in the Central Region in 1987, a new distribution campaign was organised, now with the beans dipped in acetic acid to prevent their direct use by farmers. This time, the harvest that followed gave great satisfaction to the farmers who then decided to engage in the cultivation of beans. The question now became how to build on this success.

Three main tracks were developed. The first focused on training, the second on marketing, and the third on the prizes for excellence awarded to the best farmers.

According to research, the productive sector is both the main engine of growth and an impor tant source of jobs in the fight against poverty. For developing countries, investing in the training of farmers provides significant economic and social benefits. Training can enhance the skills of farmers to increase productivity. Training is effective when it is an integral ingredient in an overall improvement in the situation of the farmer.

Decentralised training, meanwhile, allowed for the demonstration of practical cultivation techniques to farmers. It was concerned with new techniques for bean production. 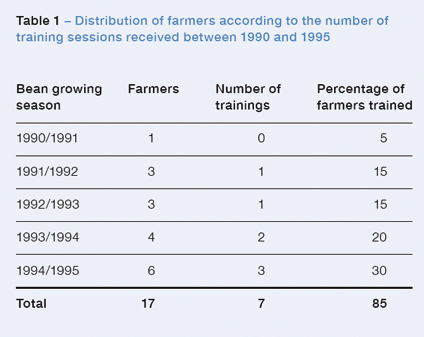 CHASA ADD-M also started to train farmers in basic sales techniques as well as the practice of collective sales. In general, it was up to the NGO to provide knowledge to farmers to enable them to negotiate partnerships to ensure the flow of products. Moreover, this association contributed to the establishment of a marketing structure for beans in the Central Region with the help of the Concer tation Nationale des Organisations Paysannes du Cameroun (CNOP-CAM) [National Association of Farmer Organisations of Cameroon]. This platform was responsible for ensuring the control of drainage channels for the beans in order to improve the income level of farmers.

During this period, bean production in the Mfou area continued to increase, to the great benefit of producers who saw a marked improvement in their income (Table 2). 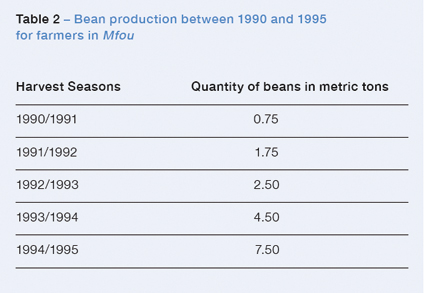 To conclude its work, over the years the CHASA ADD-M awarded farmers who had distinguished themselves through their dedication to the work of bean production by providing them with work tools and substantial financial support.

CHASA ADD-M helped promote the cultivation of beans by farmers in Mfou. However, one must also recognise that the people will only adopt new crops when they can see the direct benefits.

Once the innovative process is introduced, it is necessary to provide training that covers not only the dissemination of agricultural technologies, but also advantageous sales techniques that facilitate the flow of products from these farming activities.

Martial Patrice Amougou is a linguist by training, and holds a Masters degree in Engineering and Development of Employment Systems from the University of Toulouse. Af ter studying at INJS in Yaoundé, which allowed him to acquire the position of Senior Advisor Youth and Spor ting Activities, he began working as Director of Studies and teacher at the same institution. He is a member of the International Network of Engineers for Education for Development (RIIFADEL) and is currently a PhD student at the University of Yaounde.

Historian by training, Bienvenu Habit enrolled in the National Institute of Youth and Spor t of Cameroon in 1999, where he emerged three years later as a Senior Advisor for Youth and Sporting Activities. He studied management and planning of projects, offered courses in popular education and for more than ten years led research work on spor ting activities in the Science and Technology depar tment. He is currently a PhD student at the University of Yaoundé. 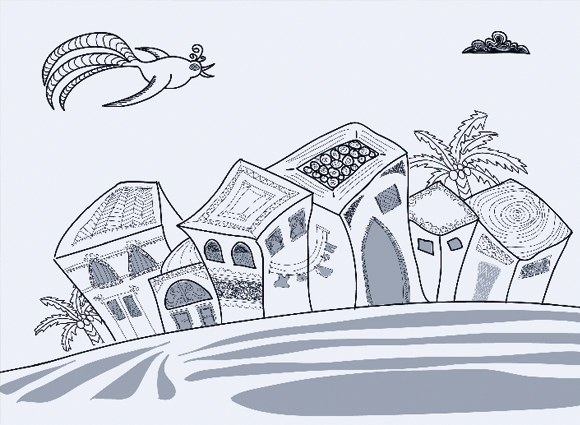