Abstract – Can a music group embody the spirit of a community? Perhaps this ethno-reggae band is a good example of what happens when music meets community. For a while they managed to capture the ears of their contemporaries, only to disappear into oblivion. What happened?

The last time I watched Diwata… Anak ng Tribu per form was sometime in 2001 at Bistro Tagbilaran (the former Zoom Disco). Many have been asking where they are now. Others are just a bit curious to know if these guys actually did exist. I assure you they did. Let me bring you back along memor y lane leading to the enchanted path where they once existed.

If you are talking about congresses at the grassroots, organisational activities, fund raisings at a school or an advocacy of some sort, these guys were there. They performed not just for fun but for a cause. Their prime objective was to educate the adult population through cultural presentation, and to bring the community together. Literally, they made the rhythmic beats of our province back in the day.

Diwata (which means ‘spirit’ in English) anak ng tribu (child of the tribe) – was the first ethno-reggae group of Bohol in the late 1990s. Why they decided on such an outlandish name was an enormous enigma at the time.

DIWATA’s genesis did not include anak ng tribu. The suf fix was only added once the group formally had undergone a ritual from the Higaonon Tribe in Bukidnon, Mindanao.

At first Diwata was just an acronym for Django Valmores, Waway Saway and Tatting Soliva, three troubadours from  Mindanao busy plying their trade of art works and indigenous crafts. They were not what you would call “typical” sellers because every time a customer wanted to buy one of their products, they provided a brief introduction to it, down to where it came from and its uses. 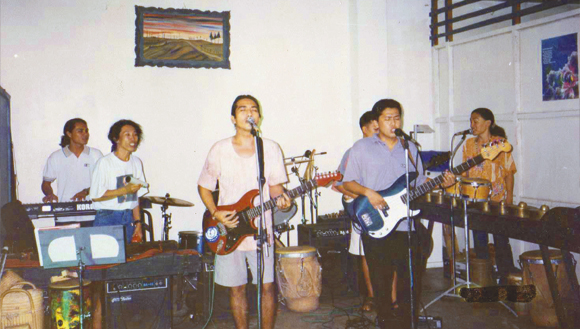 When they were at University of the Philippines’ Sunken Garden, Diliman Campus in 1992, they got the chance to jam with musicians who were great supporters and advocates of indigenous world music. When Edru Abraham’s members of KONTRAGAPI (Kontemporaryong Gamelang Pilipino) hung out with members of Diwata, they were asked questions concerning their identities and affiliations, what their interests were, and what causes they stood for. This encounter encouraged them to coin the group’s name “DIWATA”, taken from the first syllable of their respective names.

When they went to Bohol province it was neither an accident nor a coincidence. They went to take par t in the Sandugo Festival Trade Fair in 1994. Besides, Tatting’s maternal and paternal roots were from Loay and Antequera, Bohol. This made the province another place to stay. When a development worker (Egay Dy) of the Community Awareness and Services for Ecological Concern (CASEC) invited them to support the cause by bringing empowerment through music – they were immediately interested. For them, volunteering was a noble task.

After a while, Django decided to go back to Boracay where he lived and had settled with a Belgian wife who was working with an international non-profit organization. Tatting stayed in Bohol and explored another field of craf t with an NGO. He became a resident ar tist under the research depar tment of Community Awareness and Ser vices for Ecological Concern. Waway was determined to go back to his tribe (Talaandig) in Bukidnon, Mindanao. He did so after an on-the-job training workshop on terra cotta, visual arts, hand-made paper making and macramé with Tatting as his mentor.

It was in the second quar ter of 1996 when Bagong Sibol was merged with Diwata… anak ng Tribu. This is also when their journey towards people empowerment began. They became the cultural arm of CASEC, bringing Adult Education through music. The role of this group became very significant, especially in suppor ting ecological preser vation and rehabilitation. Hearing their music was a therapy of some sort. But most of all it offered a direct path to the youth and the grassroots. Their medium is very effective for it aims at both the heart and the mind. 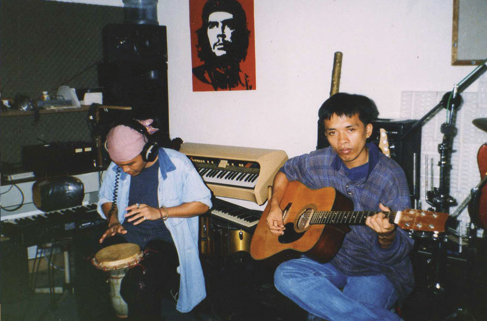 Tatting Soliva plays the doumbek with the late Danny Borbano on lead guitars during the Freedom Album studio recording. 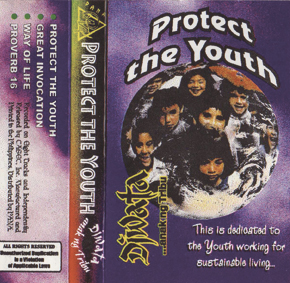 Adult Education through music produces a positive impact on the listener. It enlivens their awareness on their respective role towards ecological conservation, preservation and rehabilitation.

To get their message out Diwata worked hard and diligently. All their ef for ts paid of f, in the end they became the most sought after group of their time.

If you were fond of exploring gigs for a cause at that time, you likely witnessed these cool guys perform. Perhaps you’re one of those who nodded your head and thumped your feet on the ground. Probably you relished the message of their lyrics. Their kind of music was simply irresistible – they were the first group in the province who popularized ská and reggae beats. They were also among the first who introduced so-called “world music”.

The crowd was not as friendly as you might have thought at first. Most people were somewhat repulsed by their kind of music. They found it weird and eclectic. It took time before the crowd gradually acknowledged their genre and their purpose.

In 1997, their first album, “Buhay at Kultura” (Life and Culture) was released. It is a mixed genre record – with rock, slow rock, jazz, pop, new age and world music thrown in.

In the following year (1998) – an Extra Production (EP) Album was made as a sound track for the International Summer Youth Work Camp (ISY WC). It was called “Protect the Youth.” Also this album offers a mixed genre of pop, reggae and world music. ISY WC attracted youth organizations worldwide from Ghana, Africa, Germany, USA and the Philippines – Bohol, Davao, Bukidnon, Leyte and Manila.

In the last quarter of 2000 they released their first reggae and ská album, “Freedom”. Then, in Februar y 2001, they recorded their fourth world music album; “Back to the Roots.” Both albums were officially released at Bistro Tagbilaran in March 2001.

The influence they had on the community and on the music scene was immense. Diwata … anak ng Tribu thrilled and encouraged Boholano bands to come out in the open with original music straight from the hear t. One of their unforgettable events was the 10-hour concert “Buntagay ‘ta Bay” ('til morning) in 1997 at Bohol Cultural Centre. Local bands from the province participated with their own original compositions. Another memorable moment was the Woodstock concert at the CPG Complex in 1999, organized by Atoy Torralba.

Where are they now?

They came, they ruled, they disappeared. Where are they now? Why did they quit at the height of their fame and influence? Did they disband for the same reasons as so many other bands, i.e. internal fighting, or did they grow apar t? Or perhaps they lef t the par ty when ever y thing was at its best, in order to explore and enjoy life? Let’s have a look.

Webner Paul Remolador(front man, vocals and rhythm guitars) was once connected with CASEC (an NGO) – spearheaded the Heifer International Project based in Leyte and sometimes did some gigs with Cebuano bands. He is now married with kids and does some online work at home in order to focus on his family.

Joener Comahig (bassist and back-up vocals) popularly known as Ø.N.E. is now connected with one of the country's largest gas industry companies.

Arcie Ybañez(rhythm and back-up vocals), joined the group in 2000 is today with Bodoy of Jr. Kilat (a local band) and works as a part time college instructor;

Reigel Torrevillas(drums and back-up vocals) is happily married to his long-time girlfriend and currently based in Dubai with their two sons. Reigel is busy creating new compositions and has done some gigs in Dubai with his new group but has a day job as a licensed nurse;

Egay Dy(indigenous instruments and lyricist) is now at Candijay, Bohol – manning the Institute for Continuing NonFormal Adult Education (ICONE) and still active as a devel opment worker;

Gilbert Ampoloquio(keyboardist), now resides at SierraBullones with wife and children, he’s into organic farming and manages a small convenience store;

Tatting Soliva(percussionist, back-up vocals, kulintang, flute, digeridoo and other indigenous instruments) is now a registered social worker and has worked as a community social worker officer at the Local Government Unit of Corella, Bohol. He is still into advocacy and volunteer work. He is the creator of Tadiyandi Arts (a collective artist group based in Bohol) and happily married to this writer;

Danny Borbano(lead guitarist, trumpeter, composer, arranger and the musical director of the group) is now in heaven. He joined the Creator January 23, 2003.

So, why DID they break up? Many bands come and go, some last longer, others are short-lived. But Diwata … anak ng tribu never came to this point. They may have had different reasons at the back of their minds, but they never disbanded. Rather, they live their lives along the paths life has led them. They might still be anticipating the day when their roads will cross again. On that day they will bring the heat and beat back to the stage, perhaps in tribute to Danny Borbano. As the great Lebanese essayist, novelist and poet Kahlil Gibran once wrote: “Music is the language of the spirit. It opens the secret of life bringing peace, abolishing strife.” I hope that Diwata’s music will live on in our hearts and their existence cast a blueprint in all our memories. Their contribution of advocating Adult Education at the grassroots level provided means for others to build on what they have started. There are many musical groups now who are following their footsteps and some are contemplating getting active in Adult Education and community causes.

As a matter of fact, the community needs a new approach in spreading advocacy to have a greater impact among the young. As Diwata showed, music, and learning through the lyrics, can ignite the spark that leads to change. Through music, learning can be achieved by any means and forms, wherever people are living life with a purpose.

Merrian Piquero Soliva, PhD, is a Media production specialist and Electronic extension coordinator of the Agricultural Training Institute-Regional Training Centre 7 in Central Visayas, Philippines, the extension and training arm of the Depar tment of Agriculture. She has been a Research Coordinator of CASEC. An active advocate of Adult Education, she has also worked as a part-time college professor.